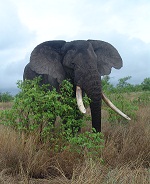 Origin of Name: Named for the Borehole 5km south-east of Vlakteplaas on the banks of the Dungile Spruit and was the name of a former inhabitant of the area.
Range: Vlakteplaas, Babalala Waterhole.
Special Features: Prominent v-shaped tear in his left earlobe, with several square shaped notches further down the earlobe. A smaller v-shaped notch on the right ear lobe towards the bottom of the lobe is less prominent but is still visible. His right tusk appears to have been broken at some stage and is considerably shorter then the left tusk.
General: Photographed for the first time by Dewald Keet, state vet department.