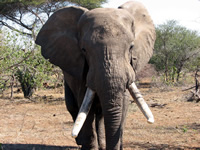 Origin of Name: Named in memory of Ampie ‘Tsotsi’ Espag, who spent many years in the service of the Kruger National Park as both a ranger and hospitality manager. (Tsotsi, meaning sneaky, trouble maker, skelm)
Range: Letaba Rest Camp
Special Features: Tsosti has very symmetrical substantial weighted ivory, with the left tusk slightly more curved upwards then the right. There is a notable u-shaped notch in the right ear lobe towards the top, with a square notch approximately 15cm below this. 2 small holes approximately 5cm apart on the right ear lobe slightly below the centre part of the ear lobe, not always visible.
General: Tsotsi is a well know inhabitant of the Letaba area, who has a penchant for destroying fences around the camp and staff villages, it was for this reason that the staff felt it appropriate for him to share the name Tsotsi with Ampie Espag for his cheeky habits. He was first recorded photographically in 2004 by Kirsty Redman. At this stage while his tusks had significant weight they had not developed in length, none the less as a young bull he had the potential to develop. In the subsequent years Tsotsi has hit a growth spurt and his tusk length has almost double since he was first recorded. As a result it is felt that Tsotsi has the potential to become one of the Kruger National Parks big tuskers. Tsotsi was named in 2007 during the judging for the 2006 Emerging Tuskers Competition year.