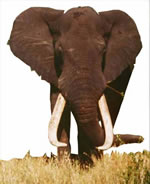 Origin of Name: Named after the Dzombo stream that traverses the Mopani Flats between the Shingwedzi and Shawu valleys. (The word Dzombo is derived from the Tsonga word Dzombolo meaning ‘to wait for something that is slow in coming’)
Range: He lived in the area bounded by the Tsendze, Letaba and the Shingwedzi Rivers and was most frequently seen along the grassy vlei system of the Shawu valley.
Special Features: Dzombo’s tusks are the classic shape of the Kruger National Park Elephants, bowed and curved pointing forward and slightly upwards. They were also almost identically shaped in length, weight and thickness.
General: Dzombo was the only one of the “Magnificent Seven” to be killed by poachers and it was only by a stroke of luck that Dzombo’s two tusks were not taken. He died in a hail of bullets from an AK 47 fired by a poacher from Mozambique in October 1985. The miscreants were in the act of chopping out the tusks when they were disturbed by the approach of Ranger Ampie Espag and fled leaving their trophies behind. Dzombo met an untimely death at the age of 50 years.
(Dzombo’s tusks are on display in the Letaba Elephant Hall)