In a previous issue (link), we interviewed Paul Zway the owner and founder of Exclusive Tents, one of the most successful safari tent manufacturers, supplying the most prestigious resorts, glamping and safari destinations across the world.  In that issue we looked at how the business began and touched on Paul’s background as a Game Ranger in The Kruger National Park for seventeen years.

2018 has been a busy year that will be well remembered by Paul and his team. Together we looked at the challenges and triumphs that have made this year magnificent.. 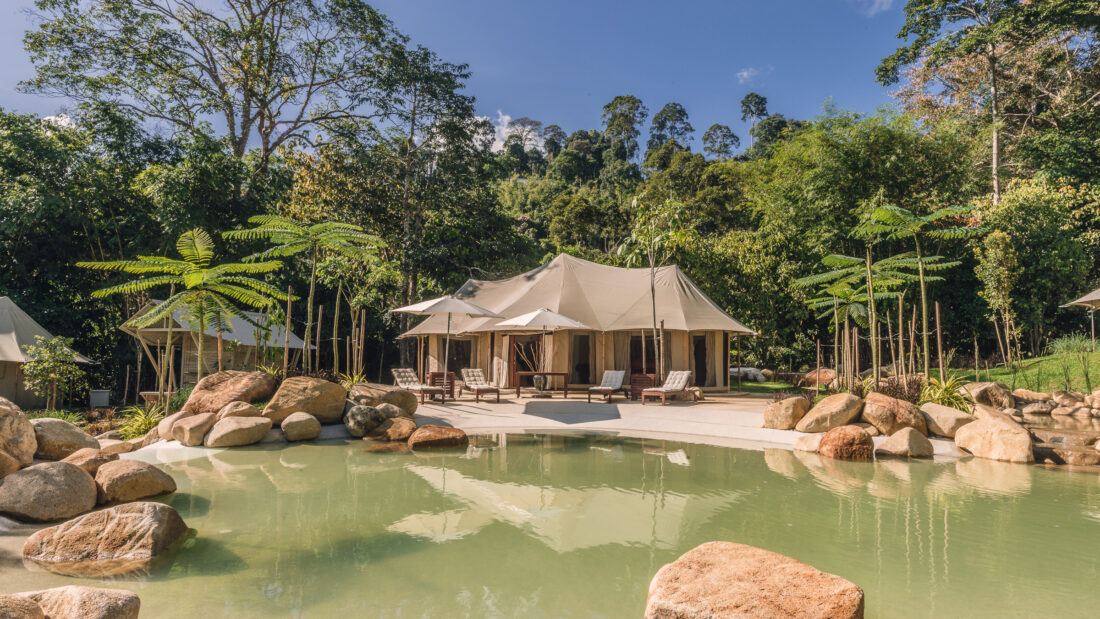 Corporate bureaucracy has no place at Exclusive Tents, Paul is the anti-office boss and conducts his business with the same casual grace and ease that someone may use to organize a Sunday barbecue. Although he would definitely call it a braai. He is a man who has learnt the value of good connections and friendships and knows the kind of inspiration that can come from having them. This was clearly demonstrated this year when the decision to change manufacturers was taken and Johan Maree was brought on board.

“The effects were felt almost immediately and are still being felt now,” Paul says, “You should never underestimate the power for change that happens when you find yourself working with someone on the same page as you with the same principles and drive.”

He explains that with the previous manufacturer he did not have much say in how his tents were produced, this along with some other reasons were why they cut ties. But since working with Johan Maree things have been different.

“Firstly, it affected the sorts of projects we felt that we could take on,” Paul reveals, “Johan, is much like me, we love the concept of doing something different and striving for the best to not impress anyone else but ourselves. It was like shackles had been suddenly removed and we were free to say yes to those different and unique projects that knew would challenge us.”

Such as a new project in Uganda that is currently having plans drawn up for it. It is a big project, an opportunity to pioneer new methods and put new materials to great use.

“We’ve finished the drawings for a common area tent that will be used by the client for conferences and meetings and act as a centre for people to gather,” Paul says, “It could be up to four stories high which is quite an undertaking for a tent.”

Each client has a playbook that they give Paul, and this includes images and ideas that they’ve put together so that Exclusive Tents can have an idea of what their vision is. This acts as the preliminary blue print and is a very useful method for the designers to gauge what a new client wants.

“Our Ugandan client was clearly inspired by high vaulting ceilings like in a cathedral with a gran span of space to give an incredible impression to those inside. Structurally it is a challenge and we’ve had to think outside of the box to meet their vision,” Paul says.

The Exclusive Tents team have been invigorated by the change. Excitement generates proactivity which influences productivity and Paul says that everyone is thinking differently now and focused on the new possibilities.

“We’re a dynamic group that work well with people talking and discussing ideas,” he says, “We stimulate each other, and it is the same on Johan’s side. Johan has several connected businesses working in three different sites and now that those sites are being brought into one location his staff are finally coming together under one roof.”

Their industry is a challenging one, with many demands from many different areas. For each project there are structural, artistic, creative and budgetary considerations, each as important as the other. At the same time every project is an opportunity to push the limits of a company’s vision and abilities. According to him, you cannot achieve the necessary synthesis of talent if you are not in touch with staff and working as a team.

“We were a well-oiled machine before,” he says, “But now, we know that every component of our business is on the same page and it means that for us and our clients, there are even fewer limits to what we can achieve.”

Recently, a project that has been in discussions for over six years has finally started to take shape. Exclusive Tents could be supplying a resort in the Serengeti that could have up to twenty-eight accommodation units and all the buildings in the property will be tented. This couldn’t have come at a better time because Paul, who is always driving for product innovation, is introducing a fire retardant and wind resistant material as standard for all of their tents.

“This will be appearing in all our projects, and it doesn’t matter what size or the purpose of the tent, they were all be made of this new ultra-sturdy material that is completely fire proof,” he promises, “It will be the new standard of our products ensuring that the people within will be completely safe from fire damage.”

Over a year ago, 4 Rivers Floating Lodge, a luxurious, one of a kind resort that was committed to sustainable tourism and offered sumptuous luxury in the midst of the ecological miracle that is the Cardamoms Rainforest, almost vanished. In late 2017 an unexpected flood tragically washed through the resort causing incredible damage. Thankfully, the safety measures that had been put in place did their job and nobody was killed or injured however the resort was very badly damaged.

As a long-standing client of Exclusive Tents, Paul donated several component parts to help them rebuild and have been instrumental in the reconstruction of this fantastic resort who were able to re-open in November 2018.

Price is important, and good quality genuine luxury tents are not cheap per se, but remain significantly less expensive than hard-construction of a comparable quality. It should go without saying that the sourcing of the tents is fundamental to success: they should be of the highest quality, providing not only beauty but also technical performance, longevity and practicality. Exclusive Tents will never be the cheapest source of tents, but their mission is to offer the best “value-for-money”: High quality, robust, durable, beautiful traditional real canvas luxury tents at a fair price. It is often worth remembering the saying: “The bitterness of poor quality remains long after the sweetness of low price is forgotten” or, as once reminded, “The common law of business balance prohibits paying a little and getting a lot, it cannot be done. If you deal with the lowest bidder, it is well to add something for the risk you run and if you do that, you will then have enough to pay for something better”.

For any commercial venture the cornerstone is ROI (Return on Investment): Successful resorts offer a quality experience & service at an attractive ROI. Luxury tent resorts embody this principal with the advantage of a quicker and potentially better ROI. Of course, any resort project depends on much more than just choosing what type of guest accommodation to offer or how to embody the resort facilities. However, reduced development costs, reduced construction time, low maintenance costs, and (almost always) higher room rates than for their main stream or hard-construction equivalent are strong arguments in favour of opting for a luxury tent resort.

Owner Valentin Pawlik says, “We decided to change location and with the help of many friends we were able to rebuild with five units on land. We used recycled materials from the old site and added a new tented restaurant that will be using an Exclusive Tents tent, and a large technical and crew area. Our soft opening was at the end of November 2018.”

He also reveals that they will be adding 13 floating units, which were the unique selling point of this majestic location and will also be adding a floating bar.

“The accident was not our fault and the Chinese government did claim responsibility,” he says, “However, nevertheless, for the sake of our guests and our own peace of mind we are increasing the safety structures across the resort to make sure that something like this doesn’t happen again.”